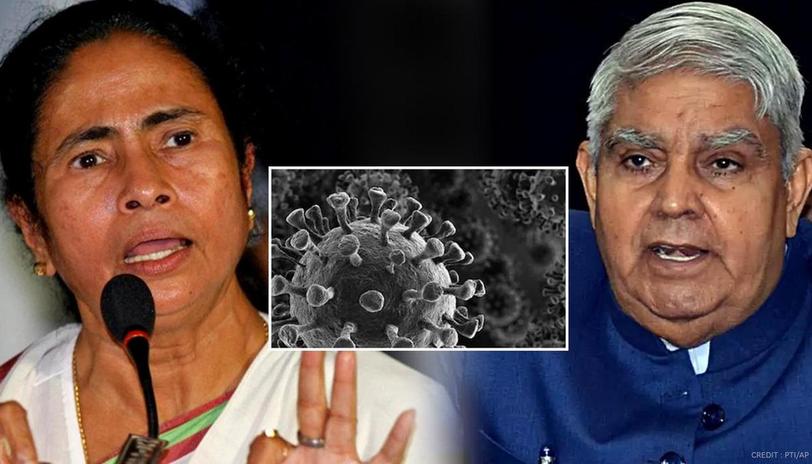 The politics of pandemic was being played out at the cost of 6.02 crore hungry and needy people. Irregularities in ration card distribution, local party henchmen taking their cut of grains from the poor, local party bosses hoarding provision to distribute in “Didi’s” name, all these continue to be part of the PDS Scam saga. Meanwhile, Mamata Banerjee continued to remain silent, leading people – especially in the hinterlands – to conclude that she is complicit in this system of siphoning off.

“News crept in… that villagers were getting mobilised against corruption in the public distribution system (PDS). They marched to the local ration dealer’s house, demanded compensation, negotiated fines; in some places people turned violent, assaulted dealers, ransacked their property or torched their houses. In some cases the police retaliated, fired at the crowd causing injuries, even death…” The opposition Trinamool Congress, identified this as a “popular upsurge” against “the anti-peoples’ policy” of the Left Front government. This was 2006 in Bankura, where the anti-PDS scam drive was particularly forceful. Turn this story to April-May 2020, the roles have reversed. The ruling Trinamool Congress’s local leaders, ministers, elected municipal leaders have been caught pilfering ration provisions and bearing the brunt of the people’s disgust for siphoning these.

The Left parties in West Bengal initially made a semblance of protest but are naturally lukewarm in their drive to expose the TMC. They believe that exposing the TMC will only strengthen the BJP’s contention that the ruling TMC’s leaders were involved in scooping off grains meant for distribution to the NFSA card holders for the next three months as a special allocation by the Narendra Modi government.

As on the month of May 2020, districts across West Bengal are seeing people protest in large number against the irregularities in PDS distribution. Local leaders of the Trinamool Congress, elected Panchayat and local body members are being accosted by people who are exasperated at the fact that the ruling party in the state, even in a time of pandemic, is ensuring that rice and grains meant for the poor are pilfered for and by party apparatchiks.

One of the first things that Prime Minister Modi announced was the PM Garib Kalyan Anna Yojana (PMGKAY) (grains) and (pulses). His mantra for the lockdown period was that the ordinary people, those dependent on the PDS system should not suffer at all and that their stocks of grains and pulses must be replenished. No one should go hungry. In line with that pledge the PMGKAY was initiated: 80 crores beneficiaries were targeted – they were to be given 5Kg grains for free for the next three months, an amount of Rs.46,061 crore was allotted, to be precise, lifting commenced and distribution started with the target of concluding the exercise by the end of April.

As part of the second portion of this huge exercise, under the PM-GKAY (pulses) 19.4 crore households were targeted as beneficiaries for receiving 1 kg free pulses for three months, an amount of Rs.5000 crore was earmarked and by 25 April, the Modi government had fulfilled its commitment to lift these in the respective state FCI storage facilities. As per the system, the respective state governments and union territories were to submit a lifting plan and would then have to lift and distribute their share of the ration allotted by the Union government.

PM Modi has always talked about team India, about cooperative federalism and even now, during the pandemic challenge he has worked according to that fundamental belief and faith. By and large the Indian states and their leaders and ruling dispensation have also displayed the spirit of cooperative federalism, the only exception being, the Mamata Banerjee led TMC government in West Bengal.

Among the many irregularities that the Mamata Banerjee government is committing in its bid to tackle the Corona pandemic, is one which especially displays its desperation and crassness. Since the last few weeks, to be precise from the first week of April 2020, reports started pouring in from across the state of irregularities in the distribution of PDS. Those who were on the ground, noticed that the Trinamool leaders at the local level were actively pilfering ration provision meant for distribution through the PDS system. These were then distributed as relief from the party with the TMC supremo’s stickers and photos pasted on them. While this happened, Mamata Banerjee and her food minister made a public display of being discriminated against by the Modi government, saying that the Union government was not releasing the state’s quota of food grains. In the days to come this proved be a patent lie. This ruse was resorted to in order to create confusion and divert attention from the fact that the TMC’s leaders were involved in stealing provisions which was actually meant for ration card holders, while also ensuring that Mamata could complain and tell the over 6 crore NFSA (National Food Security Act) card holders in the state that the Modi government had not fulfilled its promise of providing them with provisions in these difficult times. The Chief Minister needlessly went into trying to score political points. Her attitude, since the beginning of the pandemic has been negative. Initially she had publicly observed that Corona was a balloon floated by Modi to divert attention from the Delhi riots. She is the only elected Chief Minister of a State to make such a comment publicly.

The TMC’s duplicity on the PDS scheme was called out by Governor of West Bengal Jagdeep Dhankar, who in his letter to the Chief Minister dated 20.4.2020, pointed out that Union Food Minister Ramwilas Paswan had clearly stated that though the FCI was in complete readiness there was complete inaction on the part of the  state government.

In between this expose, and in face of increasing protests against her party-men across the state for stealing provisions from PDS stores, Mamata Banerjee, dismissed her food secretary, Manoj Aggarwal, sending him on compulsory waiting. Except for some perfunctory, admonitions, she refused to take action against any of her party workers and leaders. The TMC government had tripped and most saw this action against the food secretary as an unnecessary vendetta against the bureaucrat with the party leaders being lightly let off. Even this change failed to stem the tide of protests.

The Governor’s letter was followed by another letter from the Joint Secretary of the Ministry of Consumer Affairs, Food & Public Distribution to the new secretary of the food department of West Bengal. The letter exposed the lie, by clearly spelling out the allocation made under the PMGKAY and the dereliction in this regard by the Mamata Banerjee government.  The ministry’s letter dated 23rd April 2020, (D.O. No.1-2/2020-PD-II) pointed out that the government of India “in association will all States/UTs has “started the distribution of additional free food grains @ 5Kg per person to all NFSA ration card holders for a period of 3 months (April to June 2020), to ensure the food security of all 80 crore poor and needy beneficiaries covered under the NFSA, so that they do not suffer on account of non-availability of food grains during the ongoing period of crisis.”

This punctured the Mamata Banerjee government’s false claims and exposed the deliberate and intentional delay on her part. The politics of pandemic was being played out at the cost of 6.02 crore hungry and needy people. Irregularities in ration card distribution, local party henchmen taking their cut of grains from the poor, local party bosses hoarding provision to distribute in “Didi’s” name, all these continue to be part of the PDS Scam saga. Meanwhile, Mamata Banerjee continued to remain silent, leading people – especially in the hinterlands – to conclude that she is complicit in this system of siphoning off.

Through these news and reports of continuing pilferage, what is heartening is that people have begun to protest. The people of West Bengal seem to have seen through the “Maa-Maati-Maanush” slogan, a hollow and exploitative slogan. Videos have surfaced of how ordinary people caught red handed rice bags being pilfered into a rice mill for hoarding and distribution, of angry mob setting on fire ration shops, as of writing this, reports are coming in from across the state, in Bhangar, in South 24 parganas, for instance, of large number of ration cards being recovered from the house of a TMC panchayat pradhan, clashes between two TMC factions on this count, protests by people against ration theft from Nandigram, Lalgola, Salar, Domkal, Sagardighi – all situated in various districts across the state are pouring in on a daily basis.

Having unseated the Left front regime, Mamata Banerjee has now outdone the Left in its exploitative politics. It is a politics in which lumpen-cartels of cut-money dealers abound, a politics which, while paying lip service to the poor and the marginalised, actually props itself up and survives on suppressing their aspirations and snatching away their legitimate dues. The PDS scam not only exposes the most insensitive dimension of Mamata Banerjee’s brand of politics but it also one of the worst manifestations of the politics of pandemic.

The one redeeming factor is that the victims of that politics have now begun standing up.  A clear back-clash is visible and a wave of discontent is brewing across West Bengal.