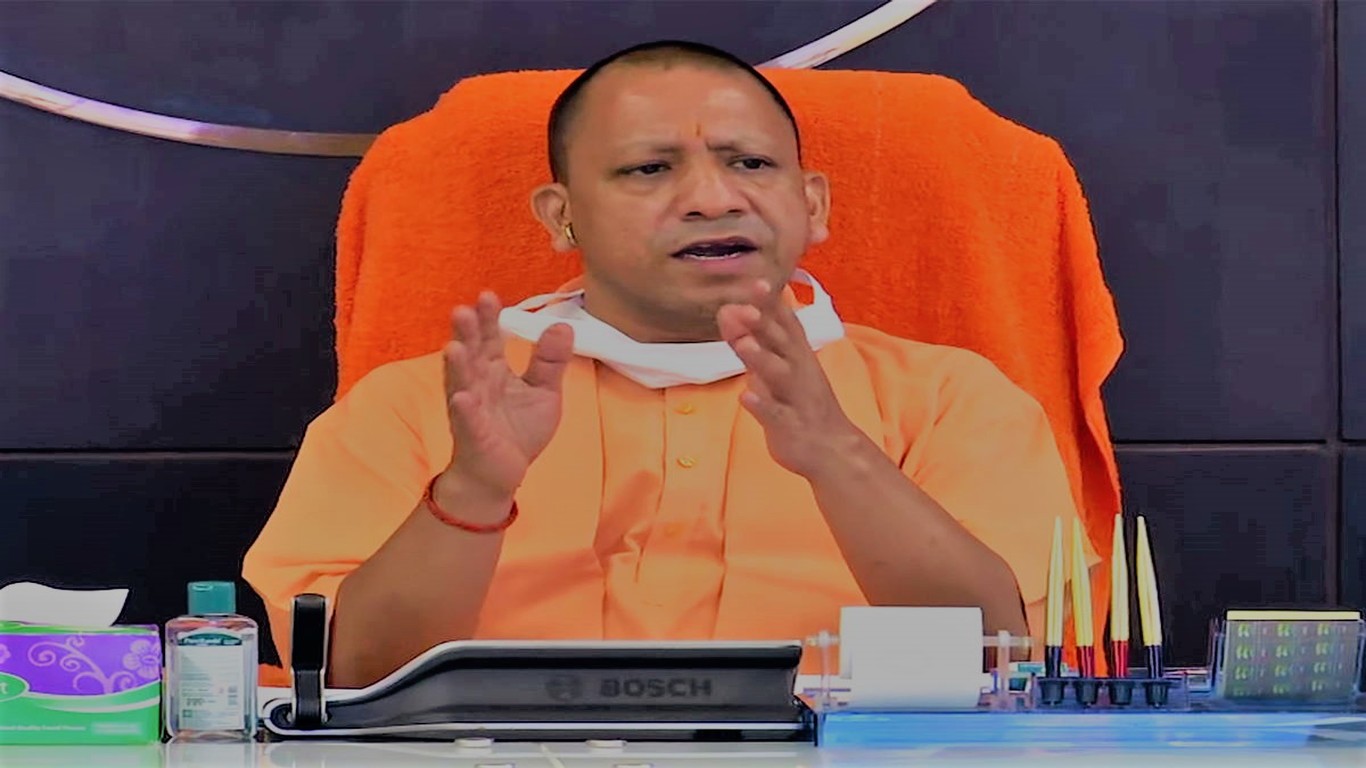 UP is in fast progress while Bengal eroding steadily. Moreover, after UP has worked with this detail & achieved significant success in Covid Control, it is UP & not Kerala that deserves to be the Reference Model of Covid Control in India.

Apart from elucidating why UP, & not Kerala, deserves to be lauded as the Model Covid Control State of India, this article also aims at depicting what West Bengal is doing vis-à-vis UP to contain Covid. Comparison of UP with West Bengal is necessary to let people know that if UP may be considered as the positive reference standard for India, West Bengal may be taken as the negative reference frame thereof.

As Indian Mainstream Media is lauding Kerala Model of Covid Control & remaining silent about UP, it is necessary to let people know how the largest State of India, UP, with largest population is doing a silent revolution in Covid Control. People of West Bengal, having experienced Left Rule since 1977 & Ultra-left Feudal rule since 2011, are well-aware of LEFT LEGACY of manipulation & misrepresentation of data & information. People of WB are also aware how well orchestrated the Left propaganda machinery is. Hence, whatever the media may say about Kerala Model, the credibility would remain low, at least to a significantly large section of the people of Bengal. Even if Kerala is truly doing an excellent job with respect to Covid, doubts would remain as it’s a matter of low credibility of the Lefts which has resulted from the political discourse over the years.

Statistically too, the State of Kerala cannot be marked as the representative State of India, which UP can be. Estimated population of UP in 2020 is 23.15 crores while that of Kerala is only 3.47 crores. Uttarpradesh can rightly be said Mini India as the State represents India in terms of demographic variety & homes 16.77% of total Indian population. Apart from demography, UP is a representative State of India with regard to its geographical span, diversity of culture, food habit & public-psyche too, while Kerala is not so. Moreover, average level of Education in Kerala is higher than the National average while that in UP is lower. With all characteristic deficits, UP’s achievement in Covid Control has surpassed the achievement of Kerala & perhaps all other States. Hence, instead of focusing on Kerala Model, it would be more accurate to focus on UP Model of Covid Control for drawing a reference for whole India.

As par official data, Kerala has done really well in Covid Control. However, data of a Left ruled State is not beyond doubt.

UP CM Yogi Adityanath came on RITAM LIVE on May 24 & was asked about the procedure UP had followed to contain the disease. UP CM described it sitting on his chair at a stretch for an hour without looking at any paper or having anyone sitting beside him to prompt with any data. This gesture of UP CM is in strict contrast with WB CM’s who sits on Press Meets with her full him of Bureaucrats, Doctors & other aides around. Her aides prompt her with data, info & even correct linguistic expressions.

UP CM’s PRESS LIVE showed that CM himself was perhaps integrally involved in each part of the State’s administration while WB CM remains more engaged in power politics. While Mamata Banerjee is predominantly a politician, Yogi Adityanath appeared to be a man of Administration. The clarity & detail of his presentation resembled those of an administrator more, than of a politician.

UP took Covid challenge as an opportunity, said the CM, giving sole credit to PM Modi’s vision & guidance. In order to check Covid spread within UP, the State formed different Committees under the leadership of different Ministers & Bureaucrats. Ministers took policy decisions while Bureaucrats decided implementation modalities thereof, said Yogi Adityanath. To ensure Governmental Services reach every section of the population, several Governmental Committees were formed under the leadership of senior bureaucrats.

—One committee looked after comprehensive requirements & issues related to construction workers of the State whose work got stopped due to lockdown.

—One committee mapped necessities of the State’s thela-walas, patri-walas & such other service-providers.

—One to look after requirements of self-employed professionals like rajmistris, carpenters, saloons, tailors, etc who provided essential services in both rural & urban lives.

—A committee under the Directorate of Infrastructure & Industrial Development looked after necessities of the State’s Enterpreneurs, Industrialists as well as the workers thereof.

—This Committee worked so that people working under different enterprises & industries got their salaries during essential lockdown & also got catered with ration & requirements.

UP thus divided the whole State Population into professional categories for administrative ease. Yogi’s administration addressed the fact that people’s requirements depend on their professional identities & public welfare can be done best by identifying their needs & necessities. This work appears primary, not only for Covid control but for any policy decision of a State. No wonder UP CM said the State looked at Covid challenge as an opportunity. UP worked heart n soul to turn the challenge into a success that sustains in post-Covid era. UP’s novel administrative reforms are expected to yield manifold in due course of time.

—One committee under Agriculture Department ensured home delivery of essential commodities to every door step. This step taken by UP Govt was a pre-requisite to make lockdown a success. This Committee extended its sub-committees at every level of the State like District, Block, Ward & Village. In a huge State like UP, this single work perhaps did half of Covid Control. Without ensuring availability of necessary stuff to people’s doorsteps, lockdown was indeed a draconian step. But UP Govt. did their part by providing home delivery.

On the contrary, we have seen mockery of lockdown in West Bengal as people huddled in open market everyday with apparent support of WB Government. Lockdown remained half-hearted in West Bengal all through as certain minority dominated areas didn’t abide by lockdown rules at all. Minority people kicked Howrah City Police in Tikiapara as Police tried to enforce lockdown rules upon them. When IMCT arrived in Kolkata, West Bengal CM had to pray with folded hands in Rajabajar so that people of minority community there followed lockdown rules. Did she have to do it to save her own face as an administrator in front of the inter-ministerial central team?

While such chaotic is the administrative scenario of West Bengal, UP CM, in reply to my specific question, said that nobody in UP ever violated lockdown rules as UP administration handled it right. This distinct contrast exists between administrative approaches of WB & UP.

As of 2nd June, only 4.29% of closed COVID cases of UP had died whereas in West Bengal, death percentage of closed COVID cases is 12.20%, almost 3 times higher than that in UP. This perhaps indicates quality of Covid treatment provided in WB is worse than that in UP. Morever, this figure is as per Official Data of West Bengal which has consistently exhibited statistical anomalies in several parameters. Unofficially, number of Covid affected patients & number of death thereby in WB are perhaps much higher than what is being reported. As mentioned earlier, data manipulation & misrepresentation have been hallmark of Left & Ultra-left ruled West Bengal for decades. There are no such anomalies in UP.

—In UP Covid Model, one Committee worked under Principal Secretary, Rural Development & Panchayati Raj to facilitate effective prevention of various vector-borne disorders like Dengue, Malaria, Kala-azar etc. well in advance. These diseases affect UP every year during rainy season. UP Govt, along with fighting COVID, became pro-active to prevent these diseases by emphasizing on SWACHHTA (cleanliness) & sanitation of susceptible places from now on. The State utilized the opportunity of tackling Covid to tackle other diseases too.

We have never seen this pro-activity in West Bengal. West Bengal is the only State of India which is hiding its Dengue data from GOI for last two years. National Vector Borne Disease Control Program’s (NVBDCP) site did not record WB’s Dengue data from 2018. WB gets tremendously affected by Dengue every year. The reason thereof is perhaps lack of cleanliness with respect to the State’s huge population density. Instead of sanitizing & cleaning Dengue-prone areas, WB Govt hides cases by instructing doctors not to certify the disease as ‘Dengue’ but as ‘Acute Febrile Disorder’. UP, on the other hand, took Covid Control Program as a scope to be pro-active to prevent vector-borne diseases too which would affect UP shortly after summer, during rainy season. West Bengal however, preferred to hide its COVID data just as it had hidden its Dengue data since 2018.

This paradigm shift is making a world of difference between UP & WB. UP is in fast progress while Bengal eroding steadily. Moreover, after UP has worked with this detail & achieved significant success in Covid Control, it is UP & not Kerala that deserves to be the Reference Model of Covid Control in India.