Right from the day of PM’s swearing-in, the NDA government has pursued a concerted agenda of strengthening ties with all nations of interest… making India a significant player in global affairs

In purely quantitative terms, the Narendra Modi government’s engagement with the world throws up some interesting 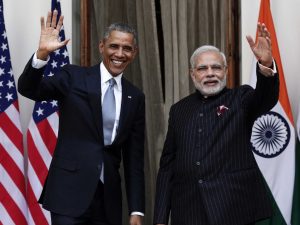 statistics. Mr Modi has travelled to 33 nations and met over 100 world leaders in the past two years while external affairs minister Sushma Swaraj made 34 bilateral visits and met over 115 foreign ministers. India evacuated thousands of those stranded in strife-torn Ukraine, Libya, Iraq and, most notably, from Yemen, where over 6,000 were evacuated under “Operation Raahat”, including 2,000 foreign nationals from 48 countries. FDI has gone up by 40 per cent and India has jumped 16 spots on the World Economic Forum’s Global Competitive Index.

But these numbers, though important, tell only a part of the story. In a globalising era, the key aspect of foreign policy should be managing the conflicting interests and expectations of different countries and fine-tuning these in our own interest. Earlier, we were stuck on keeping Israel at arms’ length in the belief that this would keep our traditional Gulf friends happy (and also for domestic votebank politics). But this government has held three unprecedented bilateral summits with the UAE, Saudi Arabia and Iran (with a Qatar visit coming soon), but also strengthened ties with Israel. When Mr Modi met Israeli PM Benjamin Netanyahu for the first time in New York in September 2014, on the UN General Assembly session’s sidelines, an Israeli commentator wrote that “the most important thing Netanyahu did in New York wasn’t at the UN”, it was meeting India’s new PM.

With Tehran and Riyadh backing rival sides in the raging civil war in Syria, it is noteworthy that PM Modi has not only visited both countries in a short span, but also got a rousing welcome in both. Ms Swaraj has already visited Israel and there is huge anticipation about Mr Modi’s expected visit. While the details are yet to be announced, as and when it happens it will undoubtedly be one of the most significant events in the history of both countries. Energy security is undoubtedly one of the top priorities of this government. The recent Chabahar agreement between India, Iran and Afghanistan will not only give India earlier access to Iranian oil, but also to Afghanistan, bypassing Pakistan. Africa is emerging as a major player in supplying oil and natural gas: the 16 per cent it contributes now is likely to shoot up. Further, uranium supply agreements with Australia and Canada are further landmarks in achieving energy security. Infrastructure development is another key foreign policy focus. Japan is funding the “bullet train” linking Mumbai with Ahmedabad, and separate infrastructure funds have been announced with the US, Britain and UAE. Almost every major country is a partner in Smart City projects.

Our partnership with the major democracies is being strengthened at every level, most importantly with the United States. Mr Modi has already visited the US thrice in the past 24 months, and President Barack Obama was chief guest at our Republic Day celebrations last year.

Next month, PM Modi will pay an unprecedented fourth visit to America, and will address the US Congress. Defence ties have been significantly upgraded, with Manohar Parrikar and US defence secretary Ashton Carter exchanging visits, and the US-India Defence Technology and Partnership Act, that puts India at par with America’s Nato allies, is before the US Senate. The “Act East” policy is yielding dividends: the results are visible in Bangladesh, Myanmar, South Korea, Singapore, Malaysia and Japan. Japan’s PM Shino Abe developed a strong personal chemistry with Mr Modi long before he became PM, as Japan (and Canada) were regulars at the Vibrant Gujarat Summits. Closer India-Japan ties are being carefully watched globally, specially in the context of China’s rising assertiveness.

Reviving civilisational ties is a unique aspect of PM Modi’s foreign policy outreach. Visits to temples in Bangladesh, Nepal and Sri Lanka, a mosque in Abu Dhabi, a Buddhist monastery in Mongolia and to gurdwaras in Canada and Iran symbolise this. The engagement with the Indian diaspora worldwide is yet another major step, involving the community in bettering ties with host countries. The grand public welcome Mr Modi got in countries ranging from the US, Britain and China is unprecedented not only in Indian political history, but for any political leader worldwide.

While all these initiatives will reap both short-term and long-term benefits, there are still a few areas of concern. India’s policy towards Pakistan has been consistent, it has made it clear that terrorism and talks cannot go hand in hand. India, under Manmohan Singh, made a tactical error by delinking terror and talks in the joint statement issued in July 2009 at Sharm El Sheikh. We can’t afford this, and the ball is now squarely in Pakistan’s court, on how it responds to Indian demands to act against the perpetrators of terror living under state protection who are involved in the attacks in Mumbai and Pathankot. Enhanced China-Pakistan defence and infrastructure ties, China’s ambiguous stance on anti-India terrorists on Pakistani soil and its opposition to India’s entry into the Nuclear Suppliers Group are adding complexities in India-China relations. Nepal’s highly fragmented polity and its inability to take along all sections of Nepalese society is yet another area of concern for India.

India has traditionally had a close relationship with Britain, and has strong ties with almost all European Union nations. The coming “Brexit” referendum in the UK is likely to have a significant impact on global geopolitics, particularly if Britain decides to leave the EU. The relationship with the US has matured enough to grow beyond American domestic politics. Therefore, irrespective of who wins in November, the outcome of the US presidential election is unlikely have any major adverse impact on India-US relations.

Two years back, when Mr Modi was elected PM, no one had imagined foreign policy would be among his key success stories.

But right from the day of his swearing-in, to which he had invited all the heads of Saarc nations, the NDA government has pursued a concerted agenda of strengthening ties with all nations of interest, rebuilding civilisational and cultural bridges, reinforcing national security priorities and extending a helping hand to all those in need, thereby making India a significant player in global affairs.

(The writer is in charge of the BJP’s foreign affairs department, This article is published in The Asian age on 27 may 2016 )