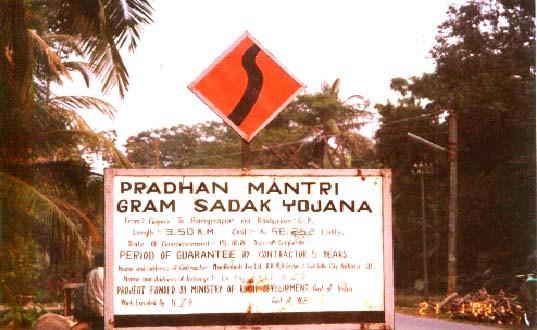 Pradhan Mantri Gram Sadak Yojana (PMGSY) was launched on 25th December, 2000 by the then Prime Minister of India Atal Bihari Vajpayee as a Centrally Sponsored Scheme (CSS). The then NDA Government conceived PMGSY as part of a broader strategy of rural poverty reduction and strengthening of rural livelihoods. This paper, analyses the less than satisfactory performance of the Assam and West Bengal Governments in implementing PMGSY.

The performance of the States is analysed on the parameters of – Number of villages (habitations) provided connectivity by PMGSY roads, length of PMGSY roads constructed, utilization of Central Government’s grant in aid by the States and the quality of the road assets created by the States. The paper also compares the performance of Assam and West Bengal in the execution of PMGSY with other similarly placed States like Madhya Pradesh, Chattisgarh etc.

The paper concludes that both the States could have executed PMGSY in a far more effective and efficient manner and could have utilised Central funds in a better way to provide connectivity to a larger number of villages than presently connected. The paper suggests some areas in which the execution of PMGSY in the two states can be improved.

Rural roads provide access to social and economic services like education and health care as well as markets to the rural population and are an important means of sustainable poverty reduction and creation of additional employment opportunities in the rural areas.

Before 2000 India lacked a scheme which would focus on rural roads and rural connectivity. Considering the fact that rural roads constitute almost 75% of the total road network in India,[1] in 1999, the Central Government, set up a committee under the chairmanship of Nitin Gadkari (National Rural Road Development Committee), which suggested introduction of a Centrally Sponsored rural road scheme, in which the Central Government would provide the funds to the State Governments as 100% grant in aid to construct well engineered, good quality, all weather rural roads and bridges. The report of the committee was accepted by the Central Government in 2000 and PMGSY was launched by the then Prime Minister Atal Bihari Vajpayee on 25th December 2000. The scheme aimed at providing connectivity to all eligible habitations with a population of 250 and above in 8 North Eastern States (Assam, Meghalaya, Manipur, Tripura, Mizoram, Nagaland, Arunachal Pradesh and Sikkim) and 3 Himalayan States (Jammu and Kashmir, Himachal Pradesh and Uttarakhand) as well as to all eligible habitations with population of 500 and above in the rest of the country.

From the start of PMGSY till 2015-16, the scheme was operated as a Centrally Sponsored Scheme (CSS), where the Central Government provided all the funds as 100% grant in aid. From April 2015 onwards, the sharing pattern of this CSS has been amended to 90:10 for 8 North Eastern and 3 Himalayan States (90% being the share of Government of India) and 60:40 for the rest of the States (60% being the share of Government of India). This change in the fund sharing pattern was triggered by the acceptance of the recommendations made by the committee of Chief Ministers, constituted in the NITI Aayog to recommend rationalisation of Centrally sponsored schemes. [2]

During 15 years of the implementation of PMGSY, the performance of the States has been variable. On the one hand are States like Punjab, Haryana, Gujarat, Karnataka which would be completing substantial PMGSY works by 2017, on the other hand are States where these works may not even get completed by March 2019 ( the present BJP led NDA Government has preponed the completion target of PMGSY from 2022 to 2019)[3]. Prominent amongst the laggard States are: – Assam, West Bengal, Bihar and Odisha.

Let us focus and critically analyse the performance of Assam and West Bengal in PMGSY:-**

PMGSY had visualized that by the end of 11th 5 Year Plan Period (2012), all States will be able to connect all habitations with population of 1000 and above with PMGSY Roads. In case of West Bengal, even in 2016, there are 1,327 habitations of 1000 + population which are yet to be provided PMGSY roads. This indicates a far from satisfactory execution of the scheme. The table below provides details of the eligible habitations in each population category, in West Bengal and the number of habitations connected by PMGSY roads by the State so far.

The average execution capacity of the State is shown in the table below (Table 2). This Table, based on the data of the last four years, shows that, on an average the State has connected 1076 habitations every year through PMGSY roads. At this rate, West Bengal will require a minimum period of an additional 6 years to connect all the remaining habitations. This fact has to be seen in the context that most of the other States in the country would achieve 100% PMGSY targets by 31st March 2019. (Budget Speech, FY 2016-17)

PMGSY also suffered from an acute under funding, during the last three years of the United Progressive Alliance (UPA 2) Government. A fact which was also underlined by Finance Minister Arun Jaitley in his budget speech of 2016-17.It was only in 2014, with the coming to power of the BJP led National Democratic Alliance (NDA), that the significance of rural infrastructure, particularly rural roads was realised and the annual financial allocations for PMGSY were substantially increased.

The Table below (Table 3) clearly shows that in case of West Bengal, the annual financial allocation of PMGSY registered a prominent jump from around 400 crores every year (in 2011-12 and 2012-13) to more than 1000 crore in 2014-15. The fact however remains that even with annual financial allocation of the State getting more than doubled, the physical progress shown by West Bengal in the PMGSY is not commensurate with the money allocated by the Central Government.

When PMGSY was launched by the NDA Government in December 2000 it was visualised as a programme that would construct good quality all weather roads in the rural areas. In fact with an elaborate three tier quality control mechanism, in the programme, quality was supposed to be the hallmark of PMGSY roads.[1] On this count also, West Bengal is lagging behind. The data on PMGSY Programme Website (Omms.nic.in), shows that while in the entire country, on an average 10% of “completed” PMGSY road works were found to be unsatisfactory, the national average was 15% for “in progress” PMGSY road works.

Table 5: Comparison of the progress under PMGSY in West Bengal and Assam with nearby NDA rule States (Madhya Pradesh, Chhattisgarh) and other similarly placed States (Uttar Pradesh).

PMGSY in Assam – a Dismal Picture

As discussed in the earlier part of this paper, most of the States would be achieving their PMGSY targets by March 2019 and a few States would be achieving these targets even earlier i.e. by 2017. But Assam presents a dismal picture. Assam has a total of 12,205 eligible habitations to be connected under PMGSY. In the last 15 years Assam has constructed PMGSY roads to connect 7,689 habitations (Table 6). Hence even now, the State has an enormous task of connecting 4516 habitations. It seems highly unlikely that the State would be able to construct PMGSY roads to all these 4516 habitations by 2019. Table 7 below demonstrates that the average number of habitations connected by Assam (based on the last 4 years data) is 299 habitations per year. At this rate it would take Assam another 15 years to achieve PMGSY targets.

The following Table (Table 8) shows the ability of the State to utilize the funds made available to it, on an annual basis, by the Central Government. On an average Assam has absorbed Rs 440 crores of Central Fund every year. The physical progress, in terms of road length constructed and number of habitations provided with connectivity, alas has not at all kept pace with the money utilized. This raises questions about whether Rs 440 crores given to the State, every year could have been more effectively utilized.

In terms of PMGSY roads constructed by the State, Assam remains a laggard State, its performance is much below the national average. The following Table (Table 9), would show that for completed PMGSY roads, the range of roads found “unsatisfactory” by the National Quality Monitors, in the last 4 years in the State is 7% to 36% (The national average being 10%). The same table also shows that for “ongoing” PMGSY road work, the range of roads found “unsatisfactory” is 185 to 33%. This fact raises two serious issues:-

Table 10. below compares the performance of Assam, in execution of PMGSY roads with States like West Bengal and Madhya Pradesh.

Table 10: Comparison with other States regarding the progress under PMGSY.

What has succeeded in Madhya Pradesh and Chhattisgarh

Both Madhya Pradesh and Chhattisgarh, being ruled by BJP Governments for more than a decade, have shown substantial improvement in execution capacity and contracting capacity. This has resulted in both the States having completed majority of the PMGSY roads sanctioned to them. This is one area where TMC ruled West Bengal and Congress ruled Assam have lagged far behind.

Both Madhya Pradesh and Chhattisgarh have also ensured durability and quality of rural road assets under PMGSY by putting in place a robust quality inspection and quality monitoring mechanism. This mechanism ensures that 100% of PMGSY roads are inspected, at least once and a maximum of three times, during the course of construction. This mechanism ensures that whatever defects or lapses are detected during these inspections can then be rectified by the field engineers and contractors responsible for construction of PMGSY roads.

Both West Bengal and Assam can learn from the quality inspection and monitoring mechanism being followed in Madhya Pradesh and Chattisgarh.

Major Weakness in Execution of PMGSY in West Bengal and Assam

The analysis attempted in this paper leads us to conclude that both in the States of West Bengal and Assam, Central funds of PMGSY have not been fully and efficiently utilized, consequently a large number of habitations in rural areas have been deprived of good quality all weather roads, even after 15 years of the execution of this programme.

Discussions with officials of the Ministry of Rural Development, Government of India, in course of preparing this paper, and with National Rural Roads Development Agency (NRRDA), have revealed that the specific weaknesses in these two States are:-

Yet, if one were to compare the PMGSY performances of Assam and West Bengal with the dynamic performance of the state of Chattisgarh– which faces a much bigger challenge of Left wing extremism and terrorism – in implementing the PMGSY, the obvious question is whether there was a lack of political will and foresight among those who are steering both the governments of West Bengal and Assam and have professed to have been working for the upliftment of the marginalized especially in the rural areas. The facts clearly shows that both the governments of Assam and West Bengal have non-performed in a most basic area, that of laying rural roads – they have failed to connect the unconnected.

(The author is a Research Scholar with interests in areas of policy, governance, programme implementations, infrastructural issues and has written papers for and has worked with a number of leading think tanks on various issues in these areas. She is currently working on projects at SPMRF besides continuing with her writings and research)

The author acknowledges with gratitude the support extended by Dr. Syama Prasad Mookerjee Research Foundation (SPMRF), New Delhi to undertake this study and for commissioning it)