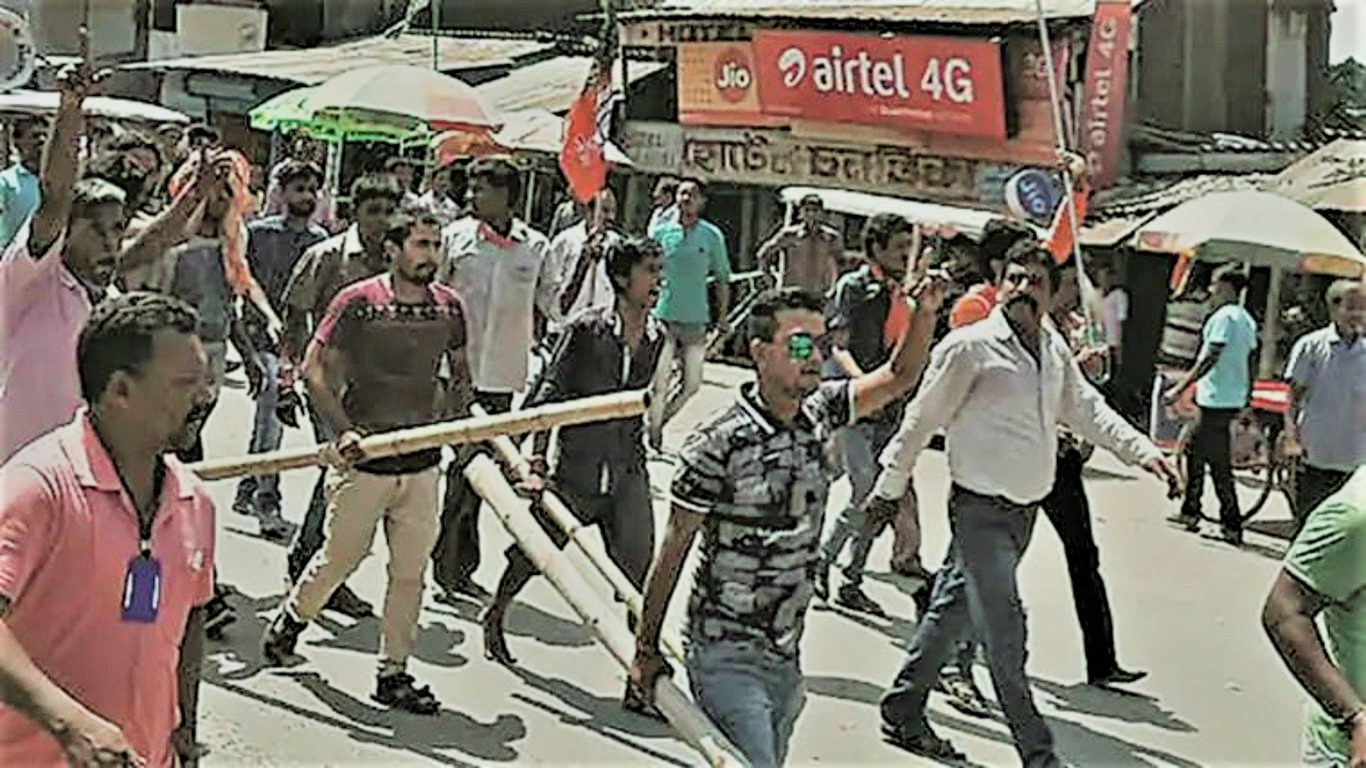 June 8, 2020, completed one year of brutal murder of BJP Karyakartas, Pradip Mondal & his brothers, at Sandeshkhali, West Bengal. Last year, after the landslide victory of BJP in Loksabha election in which BJP won 18 Loksabha seats in West Bengal, a group of Hindu men of Sandeshkhali was brutally murdered allegedly by the partymen of Trinamool Congress. Mondals were Karyakartas of West Bengal BJP.

Sandeshkhali, located at Indo-Bangladesh border, belongs to Basirhat Loksabha Constituency of North 24 Parganas. The place is infested with cross-border crimes & steady Infiltration of Bangladeshi immigrants. Sandeshkhali is one of the gateways through which Rohingyas from Bangladesh were reported to have entered West Bengal sailing through the water ways. Along the river, Sandeshkhali is situated at a stone throw distance from Bangladesh. The other entry-point of Rohingyas in West Bengal is Hardaha, Baruipur of South 24 Parganas.

Pradip Mondal & his brothers had been quite active during Loksabha Election in campaigning for BJP. However, as no space for opposition politics is allowed by the ruling party in West Bengal, Mondals had to get involved in inimical conflicts with TMC men just to campaign for their own political ideology which is different from the ruling party’s. However, after all such conflicts, when Basirhat Loksabha was won by Nusrat Jahan of Trinamool Congress, Pradip Mondal & his brothers were murdered in monstrously savage manner. It was reported by the locals that Sheikh Shahjahan affiliated to Trinamool Congress had orchestrated the brutal murders. They said, the same person often organized local violence to reinforce his feudal control upon the locality especially to dictate & mediate cross-border crimes in his terms. Pradip Mondal’s eyes were gauged out & the mode of assassination was incredibly cruel. Many of the dead bodies were packed in sacks & placed under the muddy beds of the local fishing lakes which got recovered much later. Such was the alleged cruelty exhibited by the murderers.

It was also alleged by the locals of Sandeshkhali that Shahjahan was the person who played key role in trafficking Rohingyas into West Bengal from Bangladesh. It was also alleged that Shahjahan’s Rohingya brigade was integrally involved in the brutal killings of Mondals. Mode of murder & brutality thereof also suggested Rohingyas’ probable involvement in the process.

Family of Pradip Mondal was devastated. They refused even to meet the CM of West Bengal & cried helplessly in front of the National Media as West Bengal media preferred not to cover the incidence at all, perhaps to gratify the ruler. Mondal family categorically accused Sheikh Shahjahan. They mentioned that local police was hand in gloves with Shahjahan. Mondals also claimed that Shahjahan came to threaten them along with the local policemen. Such was the level of terror that Police was unwilling to record an FIR against Shahjahan. However, after a huge Social Media uproar & following the intervention of National Media, FIR against Shahjahan could finally be lodged in Najat Police Station. However, in spite of the FIR, Police couldn’t arrest him. It was reported that Shahjahan was absconding. It has already been mentioned that Sandeshkhali is geographically located at a stone throw distance from Bangladesh & Shahjahan reportedly fled to Bangladesh by water ways in order to evade the grip of Indian law, though such hide n seek couldn’t have continued without indirect support of Local Police & Administration.

However, in spite of so many allegations against Sheikh Shahjahan & even after passing of amended & strengthened NIA Bill by the GOI in July, 2019, no concrete investigations took place as yet against him & he continued to exist there as Pradhan of Sarberia, Agarhati Gram Panchayat of Sandeshkhali. West Bengal State BJP demanded an NIA probe of the matter, but not enough strongly. Did people of WB ever heard any loud demand from State BJP for proper investigation of their party workers’ Murder Case at Sandeshkhali? Perhaps not.

The story didn’t end here. More surprises awaited for the people of Bengal. After the murderous mayhem occurred in June 2019, Sarberia Agarhati Gram Panchayat of Sandeshkhali got awarded by the Union Government’s Ministry of Panchayati Raj as one of the most Child-friendly Panchayat of India in the month of October. It came as a shock to people of West Bengal, especially Hindus, when within 4 months of Pradip Mondal’s murder, the Panchayat which elected Sheikh Shahjahan as its Pradhan got a coveted GOI award. The Panchayat reportedly worked to reduce child marriages, child labour & child trafficking in Sarberia Agarhati Gram Panchayat area. It thus became one of the 22 Gram Panchayats (out of a total of 2.5 lacs in the country) to win the Union Ministry of Panchayati Raj’s coveted “Child-friendly Panchayat Award” for 2019. This Panchayat became the first one to receive this honour in West Bengal.

People of West Bengal were both shocked & surprised. Why was the Panchayat rewarded by GOI in spite of heinous criminal allegations existing against its Pradhan? From the Administration’s view point, the legally tenable answer was simple. Sarberia Agarhati Panchayat got awarded because the Panchayat’s performance were good & its data were viewed in seclusion from the pre-existing criminal allegations against its Pradhan. Legally, the Panchayat & its Pradhan are separate entities. However, in democracy, right of people to raise questions is unchallengeable. Hence, many people raised the question whether the matter should have been viewed from a different perspective or not. They raised many questions.

—Why didn’t the person who had serious allegations against him of not only committing heinous crimes like murders & violence but also seditious crimes like trafficking of Rohingyas & absconding to a foreign land to avoid the grip of law, face any investigation thereafter?

—Shouldn’t the mere fact that the Panchayat didn’t remove Sheikh Shahjahan from the post of its Pradhan, have been enough of a disqualifying factor for them?

—Wouldn’t it have been ideal had Union Ministry announced that they couldn’t qualify Sarberia Agarhati Gram Panchayat for the said award simply because serious allegations of seditious crimes existed against its Pradhan?

However, nothing such happened. Instead of Shahjahan facing proper investigation in relation to Mondals’ assassination case, Sarberia Agarhati Gram Panchayat got awarded by the Union Ministry as if GOI indirectly endorsed keeping such tainted people like Sheikh Shahjahan on the seats of power.

Pradip Mondal & his brothers’ murderers are roaming free as yet while their sacrifice of life, have almost been forgotten. West Bengal BJP leaders had visited Sandeshkhali on June 8 as one year after Mondals’ assassination got completed on that day. The party leaders stood beside the family to console the bereaved souls. This resembled political approach of Mamata Banerjee when she was the opposition leader against the mighty LEFTs. While in opposition, she too physically stood beside people who became helpless against the reign of LEFTIST terror. However, after she herself rose to power, she took over the baton of brutality against the opposition. Hence, legitimate question arose whether Mondals’ souls would ever be able to rest in peace by mere consolation of the State BJP leaders, unless proper investigation against Sheikh Shahjahan is done & until the real criminals are punished.

It may be mentioned here that Sheikh Shahjahan is reportedly the Kingpin of all cross-border illegal transactions of that area. He was the power bank of CPM & now, of TMC. Hence, in future, if any other party forms legislation in West Bengal, his power bank may shift to them too. Is that the reason why State BJP is not enough eloquent against him? Doubts are in the air. However, it also needs to be mentioned that if an opposition party becomes hyperactive against a person of Shahjahan’s profile, common people of Sandeshkhali, especially the Hindus, might be vehemently attacked in retaliation. Hence, for all practical purposes, beginning of any proceedings against Sheikh Shahjahan needs a prior shift in the power fulcrum.

However, the questions still remain:
—Whether proper investigation against Sheikh Shahjahan would ever be done even if BJP forms legislation in West Bengal.
—Would BJP be able to change the political culture of West Bengal of terrorizing the opposition?
—Would they truly be able to loosen the tight fist of Sheikh Shahjahan & his ilk at Sandeshkhali & other border-adjacent areas of West Bengal?
—Would Mondal brothers ever get justice?