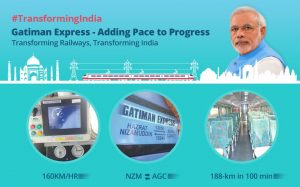 The Launch of Gatimaan Express heralds a New Era of High Speed Rail Travel in India. India’s first semi-high speed train christened as Gatimaan Express is capable of running at a maximum speed of 160 KMPH. The train runs between H. Nizammuddin station and Agra Cantt station. The on board catering train is being organized by the railway PSU namely Indian Railways Catering and Tourism Corporation (IRCTC).  IRCTC has made arrangement for deploying train hostesses also on board the train.  This train is the example of transformation in Indian railway of improved catering and it also has the options of different kinds of cuisines. Another unique feature of this train is free of cost on board entertainment. Under this facility, passengers can view various entertaining videos during travel on their smart phone, tablets or laptops even without internet connection through WiFi. The coaches which are have been used in the Gatimaan Express are new LHB coaches turned out by the Rail Coach Factory (RCF), at Kapurthala.  These coaches have been fitted with bio-toilets and are fit to run at 160 kmph.  These coaches have also been fitted with balanced draft gear couplers for a smooth ride.  The passenger amenities have been enhanced by provision of soap dispenser and auto genitors in the toilets of trains. For making the coaches free of microburst, a system has also been fitted in the compartments.  The beautiful sceneries have been pasted inside the coaches for better aesthetics.  The exteriors of these coaches have also been given a new look by a different colour scheme.  The flooring of the coaches has been given marathon shine treatment for cleaning which also gives the flooring a bright and shiny look. 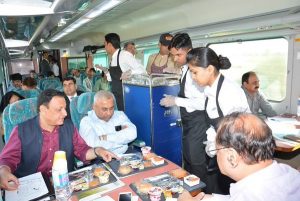